I have a guest article on Vitamin D written by Joel Dawson, Sport Scientist at Stcke City Football Club. You can follow him on twitter - @joeldawson9
There is a rising awareness about the value of vitamin D for both health and athletic performance. It is an essential nutrient, which contributes to bone health, muscle functionality and calcium regulation in the blood, to name a few. However, contrary to other vitamins, it is difficult to source and acquire the recommended daily amount with the principal source of vitamin D from ultraviolet B radiation in sunlight. The limited availability of naturally occurring vitamin D in dietary foods may provide a viable argument for the fortification of more foods. Evidence detailing the physiological importance of vitamin D will be reviewed as well as an assessment about the readily source availability of the vitamin and needs of different population groups. Only then can it be argued to whether or not fortifying different food groups is a logical and obligatory option moving forward.
Vitamin D has been found to play an active role in many physiological processes in the body (Ogan and Pritchett 2013). Firstly, Vitamin D is most well known for its active role in osteoclast activity and absorption of calcium in the intestine (Larsen-Meyer et.al 2010). An inadequate amount of vitamin D can lead to bone loss and injury because it has a crucial function in bone growth, density and remodelling (DeLuca 2004). For example, if infants and children are chronically deficient in vitamin D then the risk of rickets becomes a progressive and prominent problem (Hollick et.al 2004). Low status of this vitamin can also impair calcium and phosphorus homeostasis, resulting in a restricted calcium absorption rate in the small intestine (Heaney et.al 2003). Metabolic processes, neuromuscular activity and bone health are compromised when calcium absorption is insufficient, further stressing the importance of maintaining adequate vitamin D status. The identification of vitamin D receptor (VDR) sites in an array of tissues within the body (Holick et.al 2005) is important because VDR regulates hundreds of gene expression that perform vital bodily functions. Epidemiological evidence suggests that the VDR is involved in mediating the noncalcemic effects of vitamin D and could play an imperative role in maintanence of extracellular health and disease prevention (Grant et.al 2005).
The desirable intake levels of vitamin D are yet to be fully recognised, with recommendations differing amongst medical institutions. New guidelines were released by the Institute of Medicine (IOM) in 2010 recommend children and adults (0-70 years) to intake 400-600 IU/day with older adults (>70 years) advised to have 800 IU/day from the diet. Although, clinically it may be an amount that prevents vitamin D deficiency, it is a recommendation that is insufficient for fully optimised vitamin D levels (Ginde et.al 2009, Heaney 2008). The Endocrine Society, for example, proposes much higher dietary intake recommendations in addition to rational sun exposure. The comparison between the two dietary allowance advocated by the two institutes is exemplified in table 1 below.
Table 1: Recommended vitamin D intake levels of the IOM vs Endocrine society. Taken from Ogan & Pritchett (2013) 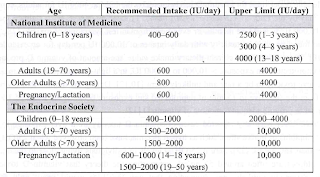 In concurrence with the lack of clarity in recommended dietary intake of vitamin D, is the reference values used to characterize serum vitamin D status. Although most researchers display similar reference values, definitive thresholds of deficiency, sufficiency and optimal status are still subject to debate. A table of classification is shown below.
Table 2: Reference values for serum 25(OH)D taken from Larson-Mayer et.al 2013 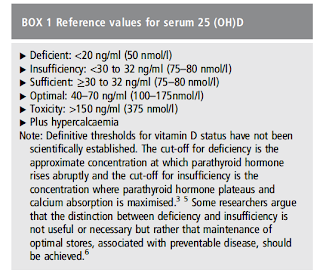 Reaching levels of >32ng/mL will enhance calcium absorption and it is at this point in which functionality of vitamin D is efficiently demonstrated (Canell et.al 2008). However, the greatest benefit of vitamin D is fully appreciated above the optimal threshold with storage in fat or muscle not occurring if circulating 25(OH)D levels are >40ng/ml (Cannell et.al 2009). Therefore, advanced processes will require frequent daily replenishment of vitamin D, a recurrent source that is currently unattainable from the common diet. This seemingly suggests that the current recommendation of 600IU per day by the IOM is only designed to prevent clinical deficiency of <20ng/mL, with higher levels such as 1000IU per day increasing availability at optimal levels of vitamin D. Holick et.al (2005) has even estimated values of 3000-5000IUdaily to fully meet the physiological needs of the body. In terms of toxicity, daily intakes of 10,000IU can take years to manifest toxic symptoms after extended use (Heaney et al 2008) with no toxicity incidents reported either from sun overexposure UVB exposure (15minutes can provide 10,000-20,000IU) (Ogen & Prtichett 2013). Over supplementation seems to be the feasible cause of intoxication with outdoor workers living near to the equator only showing levels of around 50ng/mL (Cannell et.al 2008). This suggests that dietary sources of vitamin D could potentially be optimised without the risk of toxicity.
Vitamin D is primarily sourced from ultraviolet rays triggering synthesis endogenously when the skin is exposed to sunlight. It is also naturally present is foods such as fatty fish (salmon, tuna, sardines, mackerel), egg yolks, types margarine and fortified in products such as milk, orange juice and cereal (Chen et.al 2007) (see table 1 for examples of food and IU’s per serving). However, much of the nutrient value of dietary vitamin D can be lost within the absorption process, with evidence showing it to be a process that is 50% efficient (Mahan et.al 2004).
Table 3: Selected Food Sources of Vitamin D (U.S. Department of Agriculture, Agricultural Research Service. 2011) 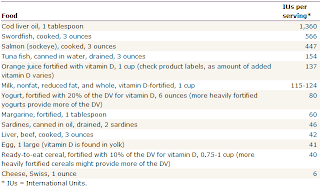 Mayur Ranchordas
I'm a lecturer at Sheffield Hallam University, a researcher and a sports nutritionist working with Olympic and professional athletes. I am also a keen triathlete.